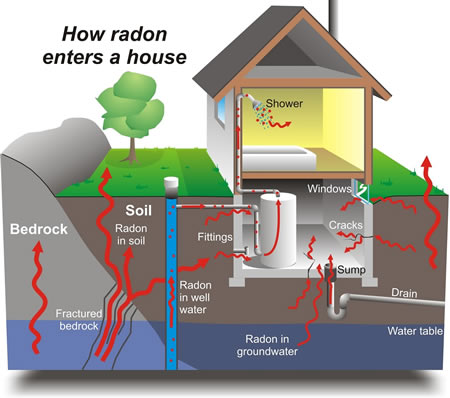 Radon is a naturally occurring radioactive gas. It’s produced when uranium, thorium, and radium break down in soil, rock, and water. It’s then released into the air. You can’t see, smell or taste radon, but it could be present at a dangerous level in your home. Radon is the leading cause of lung cancer deaths among nonsmokers in America and claims the lives of about 21,000 Americans each year. In fact, the EPA and the U.S. Surgeon General urge all Americans to protect their health by testing their homes, schools and other buildings for radon.

Is An Air Purifier Helpful For Preventing Radon?

First and foremost if you are dealing with high Radon levels in your home seek a professional’s help in assessing the situation.

Air Purifiers are great for mold, dust, allergies, bacteria and viruses, and odors, but many people do not know that they can also help with toxins, gases and chemicals such as radon. The most important type of air filter to reduce radon levels is an activated carbon filter.

Carbon, which is often referred to as “charcoal,” is a substance that has a long history of being used to remove chemical impurities. Activated carbon is carbon which has a slight electro-positive charge added to it, making it even more attractive to negatively charged chemicals and impurities. There are two principal mechanisms by which activated carbon removes contaminants: adsorption, and catalytic reduction (a process involving the attraction of negatively-charged contaminant ions to the positively-charged activated carbon).

Why You Need to be Using an Air Purifier During the Winter Months.